Home > Exams > Letter to School About Children's Involvement in SATs

Letter to School About Children's Involvement in SATs 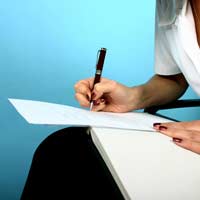 Parents hear a lot about SATs(Standard Assessment Tests) even before their child is of Sat-taking age - the exams/tests are provided for children to sit at the end of year 2 and at the end of year 6- in key stages one and two. Key stage three SATs have now been abolished. SATs are supposed to provide a loose guideline to show parents and teachers each child's educational progress compared with other students who were born at roughly the same time as them. Key stage one SATs are usually set in May, with each child being assessed in tests on literacy - including reading, writing, spelling and handwriting, maths - focusing on number, space, shape, and measurement - and science. These tests are set by class teachers.

At key stage two, the SAT exams again take place in May but are usually more formal and 'exam-like' than the earlier SATs. These exams cover English, maths and science again, and the papers are externally marked. Alongside reports, SATs results are usually organised to find out the most possible information about a child's academic development and education. So it is natural that parents may want to discover more about SATs and how their child's school helps to prepare the children for the exams.

This letter format laid out below is a sample letter from parents to a school to ask for more information on the organisation and implementation of SATs at key stage one in their child's school. The letter can be used as an example of the best way to ask your child's school about their own SATs plans.

Our son, Fred, is coming to the end of his time in year one at your school, and has really enjoyed his time at school so far - he talks about it all the time! As parents we have appreciated the opportunity to meet you as well as Fred's class teacher at parents evening, but as this term Fred will be receiving a report rather than having an organised parents evening, I wanted to write to you about an issue that is playing on my mind. I have heard a lot in the media about SATs and realise that Fred will be having these tests next year when he is in year two. I wanted to write to you to discover more about these exams and how they are sat at school - is it a formal arrangement that I should discuss at home to help Fred get used to the idea, or more relaxed? Are there any issues that I could be helping Fred to improve his readiness for the SATs test next year?

I hope I don't sound too 'pushy'! I know that Fred can get quite nervous about new situations so simply wanted to know about SATs to help him feel at ease. If you think there's anything I should know about the process that might help Fred to feel relaxed, please do get in touch. In fact, I would be very grateful if you were able to send me some information on the school's policy on Sat-sitting and how the results are used within the school. If it's easier, I'd be happy to come into school to chat about this. I look forward to hearing from you: you can contact me, Linda Rind, on 020 8453 1019 or 072349827342, or email me at linda@rind.com.

Mr and Mrs Rind, mother and father of Fred Rind(form 1b)

Letter Regarding Hayfever Trouble During Exams

Letter About a Child's Special Circumstances During Exam

Letter to School Offering to Be an Exam Invigilator

Letter to School Asking for a Child's Exam Timetable